This is a summary of the introductory lecture to the coure Image Analysis and Computer Vision which I took at ETH in the autumn semester 2018.

Interaction of light and matter

Interactions of light and matter be divided into three main types (plus diffraction).

Scattering can in turn be divided into three kinds, depending on the relative sized of the wavelength of the light and the size of the particles it is scattering off of:

Reflection can be divided into mirror, diffuse and mixed reflection.

This is only approximate, since refraction also depends on the wavelength (most apparent in a dispersive prism).

Absorbtion is a dissipation of light of specific wavelengths, depending on the properties of the medium. 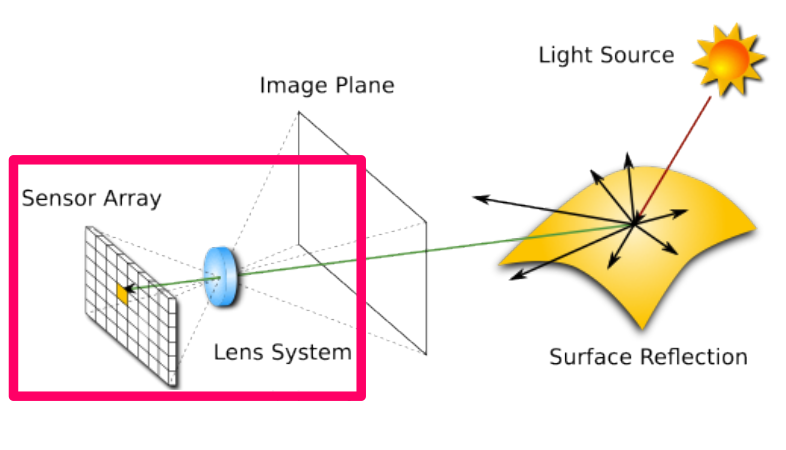 In the pinhole camera model, light is only allowed to pass through a tiny hole placed at the origin (the hole is large enough that effects of diffraction can be ignored). At a distance $f$ behind the origin, parallel to the $XY$ plane, is the camera sensor array. A point $P_o(x_o,y_o,z_o)$ is projected on the image at $P_i(x_i,y_i,-f)$. This is called perspective projection. Using similar triangles we find: 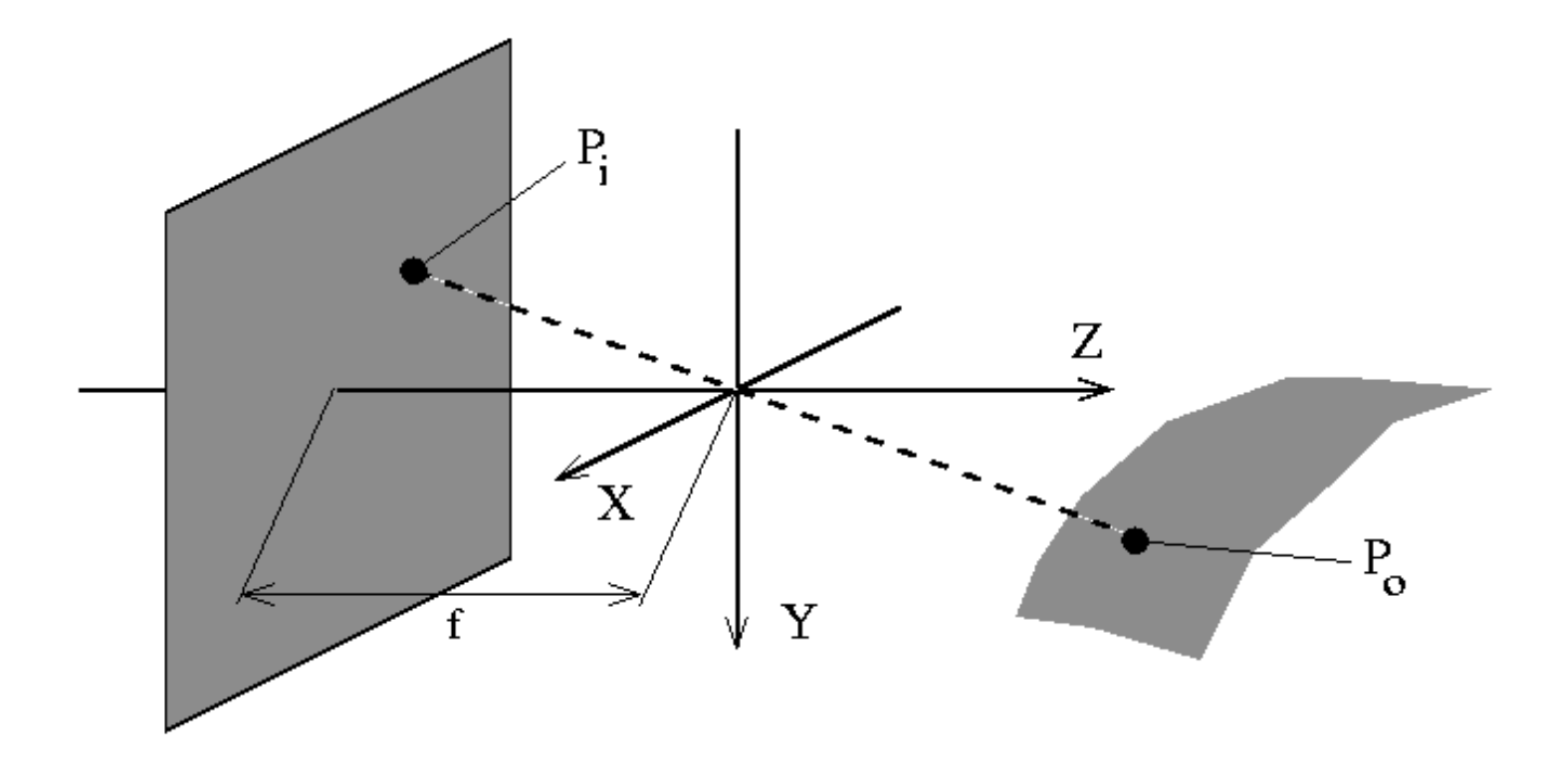 The issue with a pinhole camera is that since the hole is so small, barely any light comes through and we get a very faint image. We could make the hole bigger, but it would blur the image. The solution is to use a lens.

If we make the following assumptions:

then we can formulate the thin lens equation:

Our lens focuses all the light from a point to the same pixel in our image. This is, however, no free lunch: since the distance between the lens and the sensor ($z_i$) is fixed, the focusing effect only works for objects that are at a specific distance ($z_o$) from the lens. Points closer or further away will be blurred into circles. But how much blur is acceptable? If a pixel in our sensor has size $b$, then if a point forms a circle of radius $\le b$ on our image, we won’t notice a thing. The closest and farthest points where this holds ($P_o^+$ and $P_o^-$ in the image below) define the depth of field.

We can show that the following holds (a similar expression can be found for $z_o^+$):

In other words, an increase in the lens diameter $d$ will cause a reduction of the depth-of-field, and objects further away will be easier to get in focus (larger depth-of-field).

When an image doesn’t match the above models, we call it an aberration.
There are two main types of aberrations: geometrical and chromatic.

Geometrical aberrations are small for paraxial rays (nearly parallel to the optical axis), but become more pronounced for strongly oblique light rays. They are:

Chromatic aberrations are due to the fact that the refraction angle of light also depends on its wavelength, so rays will be focused into different points by the lens. This can be mitigated (achromatization) using composite lenses made from different materials.

In CCD sensors, the image is acquired instantaneously in all pixels, and then transferred to memory. This prevents rolling-shutter artefacts but causes slower frame-rates. CCD pixels are also generally more sensitive to light.

In CMOS sensors, each pixel has its own amplifier, which produces more noise but can be used to make “smart” pixels. These pixels are also typically less sensitive but much cheaper. We also can get artefacts due to the rolling shutter. CMOS has effectively taken over the market of digital photography, relegating CCD to niche applications.

In colour cameras we want to separate light into three components: red, green, blue. This allows us to record the intensities of these three colours, and reconstruct the original colour of the image (at least as far as our monkey-brains are concerned). 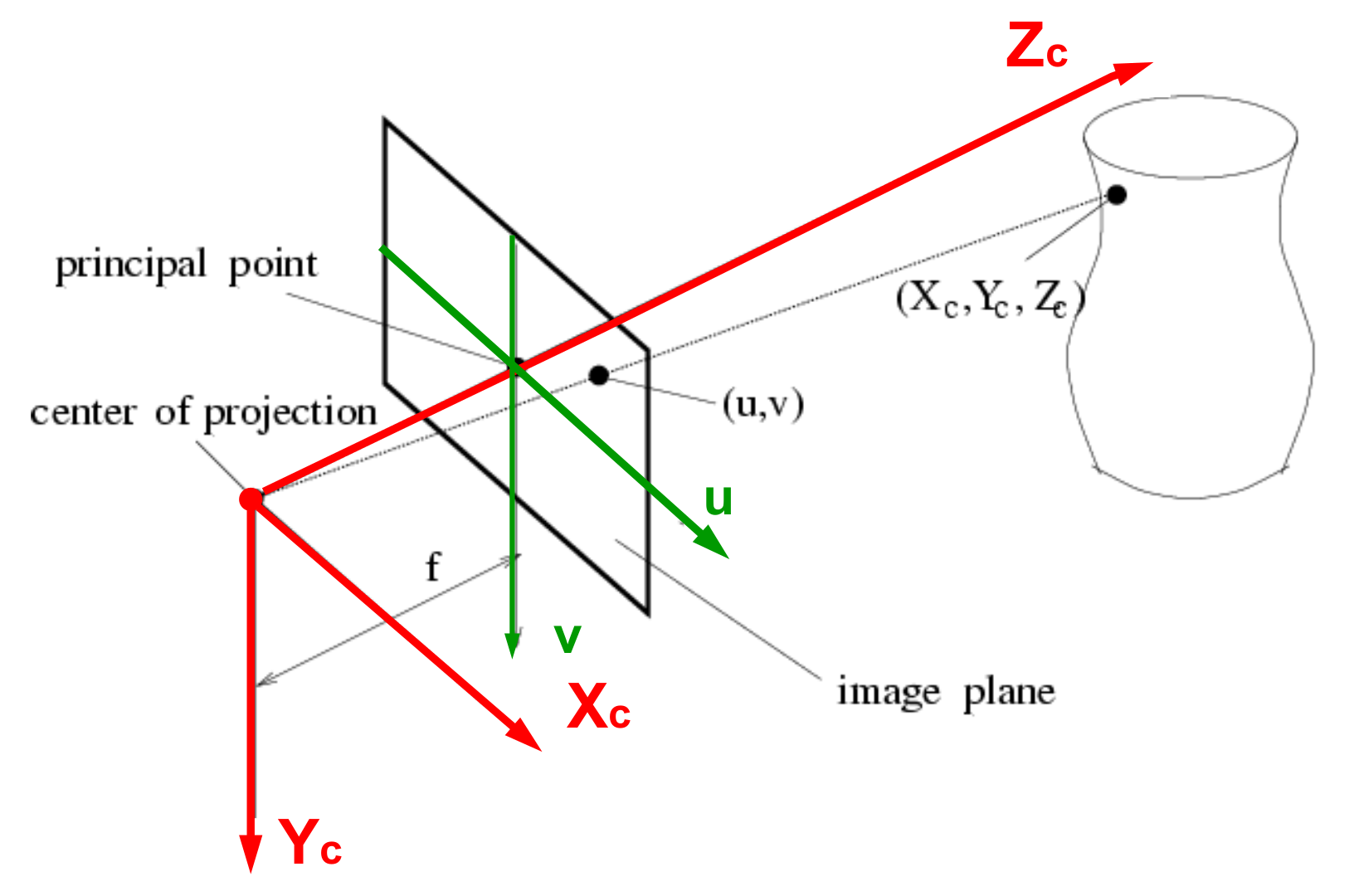 Let us introduce a coordinate system where the origin is at the centre of the camera lens and the $Z$-axis is along the optical axis. The image sensor would be parallel to the $XY$ plane at $Z = -f$. However, the image gets reversed by the lens – and when we display it, we “un-reverse” it. It is therefore more convenient to define our image plane at $Z = f$ instead – in front of the camera.
In this coordinate system a point in space $P_c$ is described by the coordinates $(X_c, Y_c, Z_c)$, with subscript $c$ to indicate that this is the camera’s frame of reference. A point on the image plane can be identified with $u,v$ coordinates. By looking at similar triangles we immediately see:
$$u = f\frac{X_c}{Z_c}, \quad v = f\frac{Y_c}{Z_c}$$

Imagine standing really far away from your subject and zooming in: the differences in distance from different parts of the subject now become negligible. So by an approximation, we can assume that the distance $Z_c$ is constant in every point of the image. So we get the projection:
$$u = k\cdot X_c, \quad v = k\cdot Y_c$$
with $k = \frac{f}{Z_c}$. This is effectively just a scaling. This model is just an approximation, but can come in handy at times, since it can make certain calculations much simpler.

Let’s make one further generalization to perspective projection. In general, we will have a fixed world frame in which both our camera and our subjects are placed. This means that we can represent the position of our camera with the position $C$ of our centre of projection and a rotation matrix $R$:

Images, however, are not continuous. They are quantized into picture elements, or pixels. This suggests a further projection of our image coordinates to pixel coordinates $(x,y)$:

We can rewrite the above projections in matrix format:

for some non-zero $\rho\in\mathbb R$. So defining the calibration matrix: