In the academic year 2019-2020 I joined ARIS Space, the student association for space in german Switzerland. There I joined team EULER, whose mission statement was to build a sounding rocket for the 2020 Spaceport America Cup competition which would reach the target apogee of 30,000 feet (9.144 km) with as much precision as possible. My role in the team was that of CFD Specialist: within the Simulations & Control subteam I worked closely with those in charge of trajectory simulation, control algorithms and state estimation to design and optimize the actuation of our altitude control mechanism.

Our goal within the Simulations & Control subteam was to regulate the apogee of our rocket’s flight to be within 1% of the target. To do this, we collaborated with members of the Structures subteam to design airbrakes: aluminium plates that can be projected out from the side of the rocket to increase drag and slow the rocket down. In order to maximize the controllability window (the amount by which we can affect the apogee), we have two design criteria: maximize the surface area of the airbrakes perpendicular to the airflow, and add a “lip” around the edge of the plate, to further strengthen the high-pressure area that naturally occurs in front of the airbrakes. 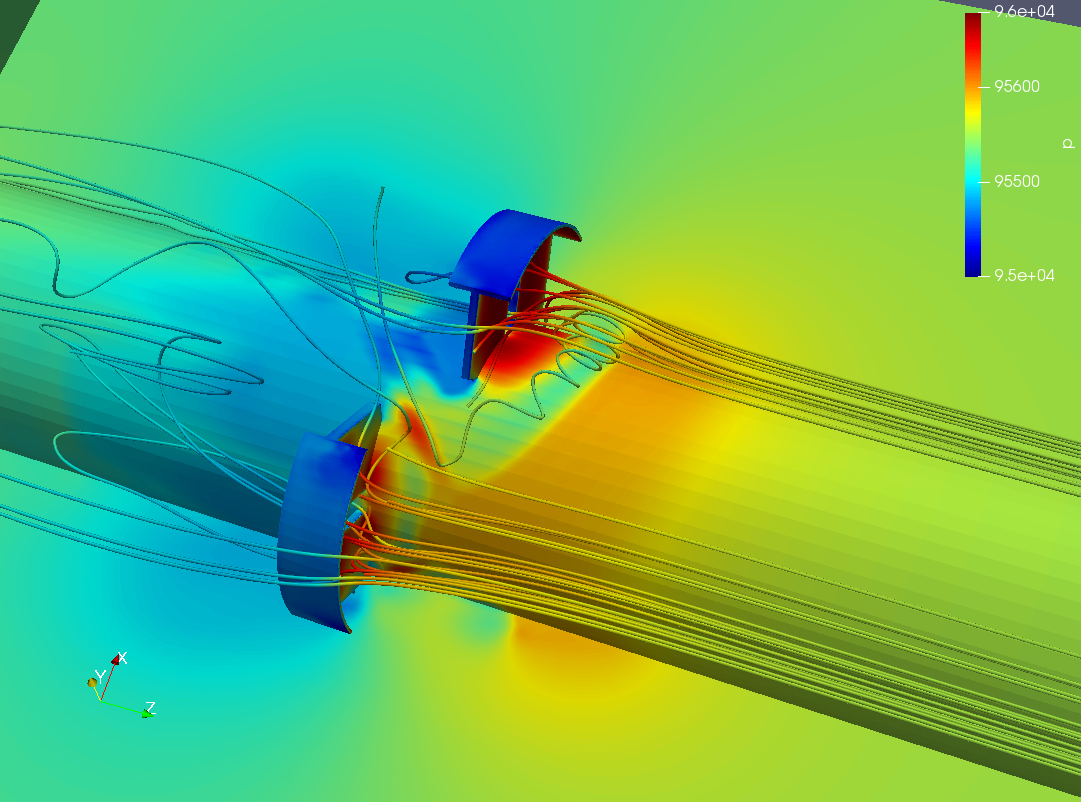 As you can see in this image, early designs included a large raised border at the outermost edge of the airbrake scoop. However, CFD simulations revealed an unexpected issue with this design: the large outer rim created considerable radial forces pulling the airbrakes outwards. Given that that we wanted to actuate the airbrakes at very high airspeeds (again to maximize our control range), these risked overpowering the motor actuating the airbrakes and forcing the airbrakes to 100% extension. Armed with this insight, we adapted the design to reduce those radial forces whilst keeping the drag coefficients high. After a few iterations, we arrived at the design shown below. 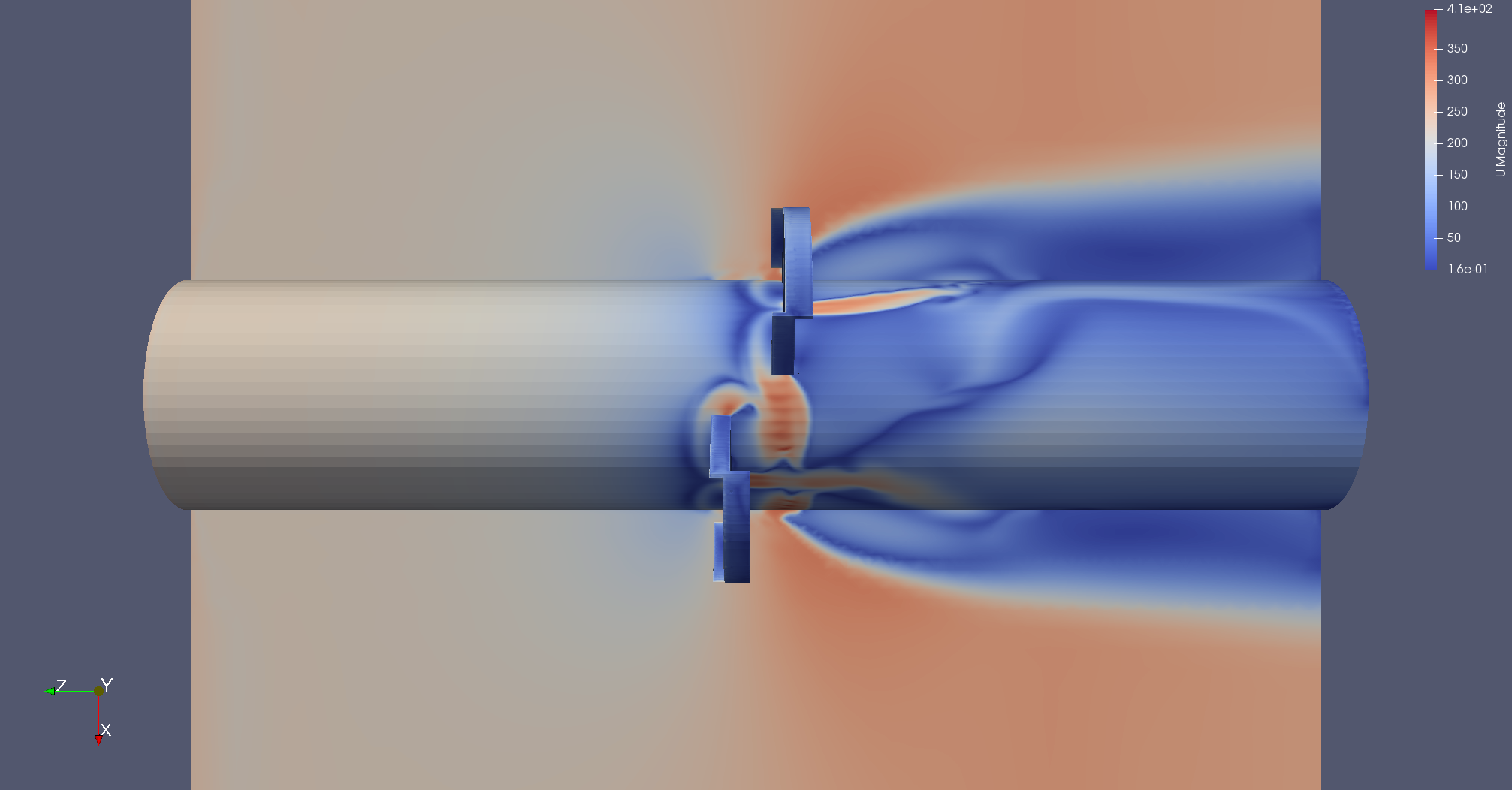 After manufacturing and the first assembly of the airbrakes and avionics sections, we were able to bask in the glory of our beautiful altitude control system. Copious amounts of tape are mandatory, or this wouldn’t be engineering!

After many more months of hard work on manufacturing, assembly, testing, and writing code, we were finally ready for a test launch! On Saturday, July 3rd 2020 the team assembled at the military training grounds near Sarnen in central Switzerland (Glaubenberg to be precise), ready to assemble and launch the rocket! 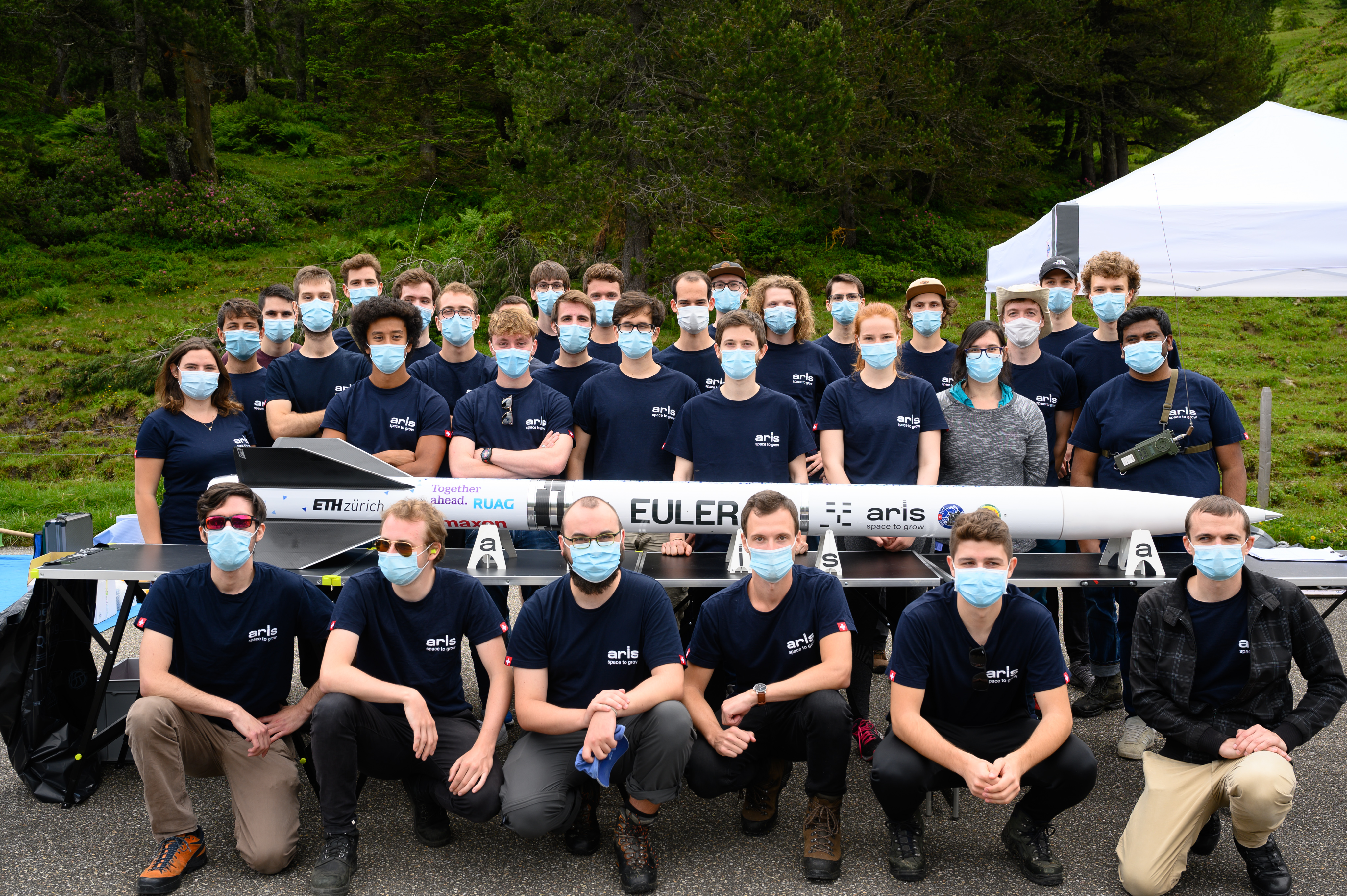 Owing to flight restrictions in Switzerland, we could not fly to the full altitude of over nine kilometers, instead we built a smaller motor into the rocket and targeted an apogee of about 1.5km above ground level. The flight itself was a partial success: the airbrakes actuated and were able to control the apogee to within 2% of the target, however the parachutes failed to deploy, resulting in a ballistic flight which destroyed our rocket. It impacted the ground at over 200m/s, and from almost 4m in length is was compressed to around 90cm in a hole in the ground! 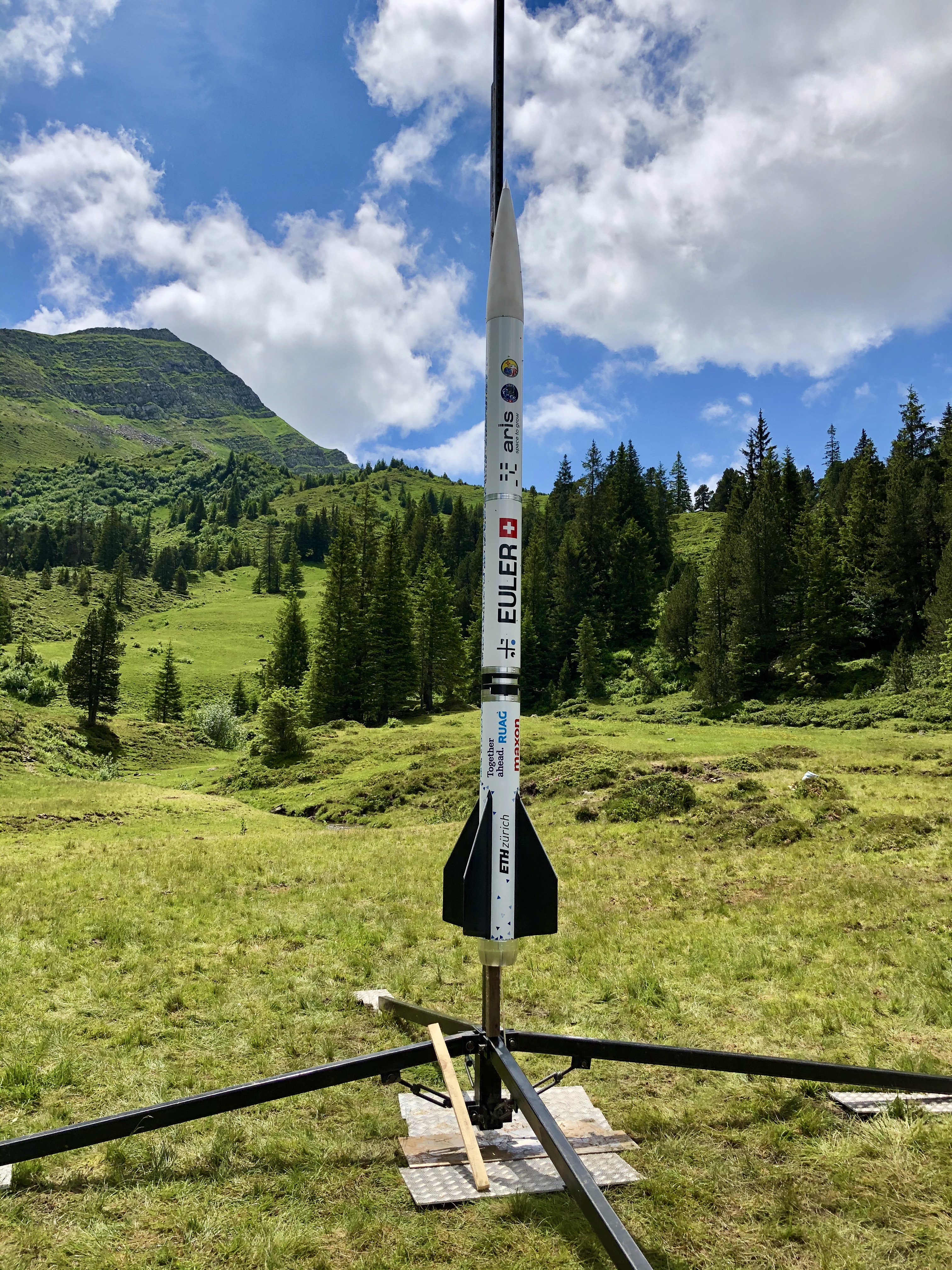 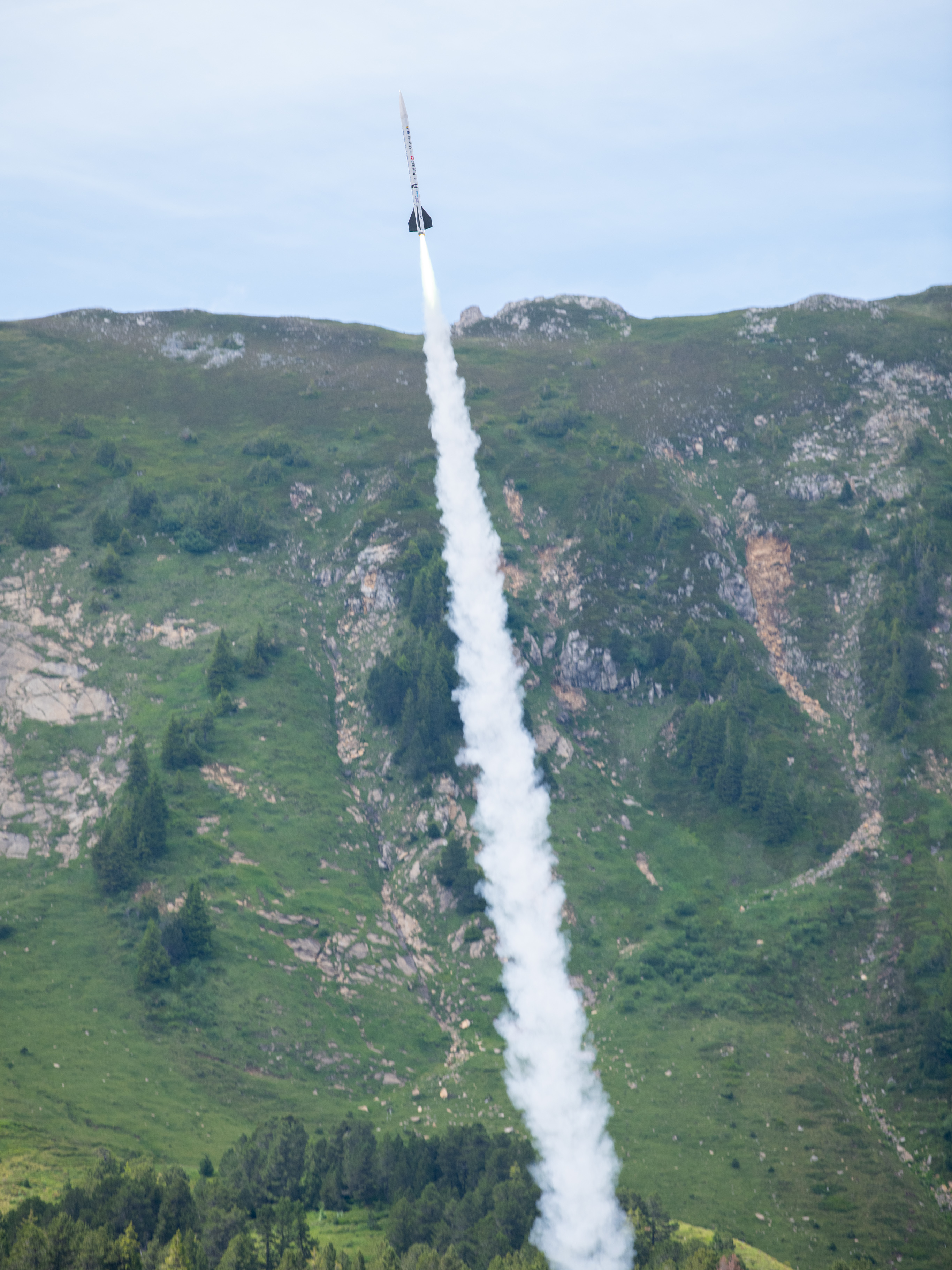 Despite the crash, the Simulations & Control team was over the moon: telemetry data indicated we had reached apogee within 2% of the target, and accelerometer data also seemed to indicate that the airbrakes had indeed been deployed. So as soon as we got home we began plotting and analyzing all the data. Unfortunately the avionics section’s SD card was destroyed, but we still had data from the recovery flight computer as well as telemetry. 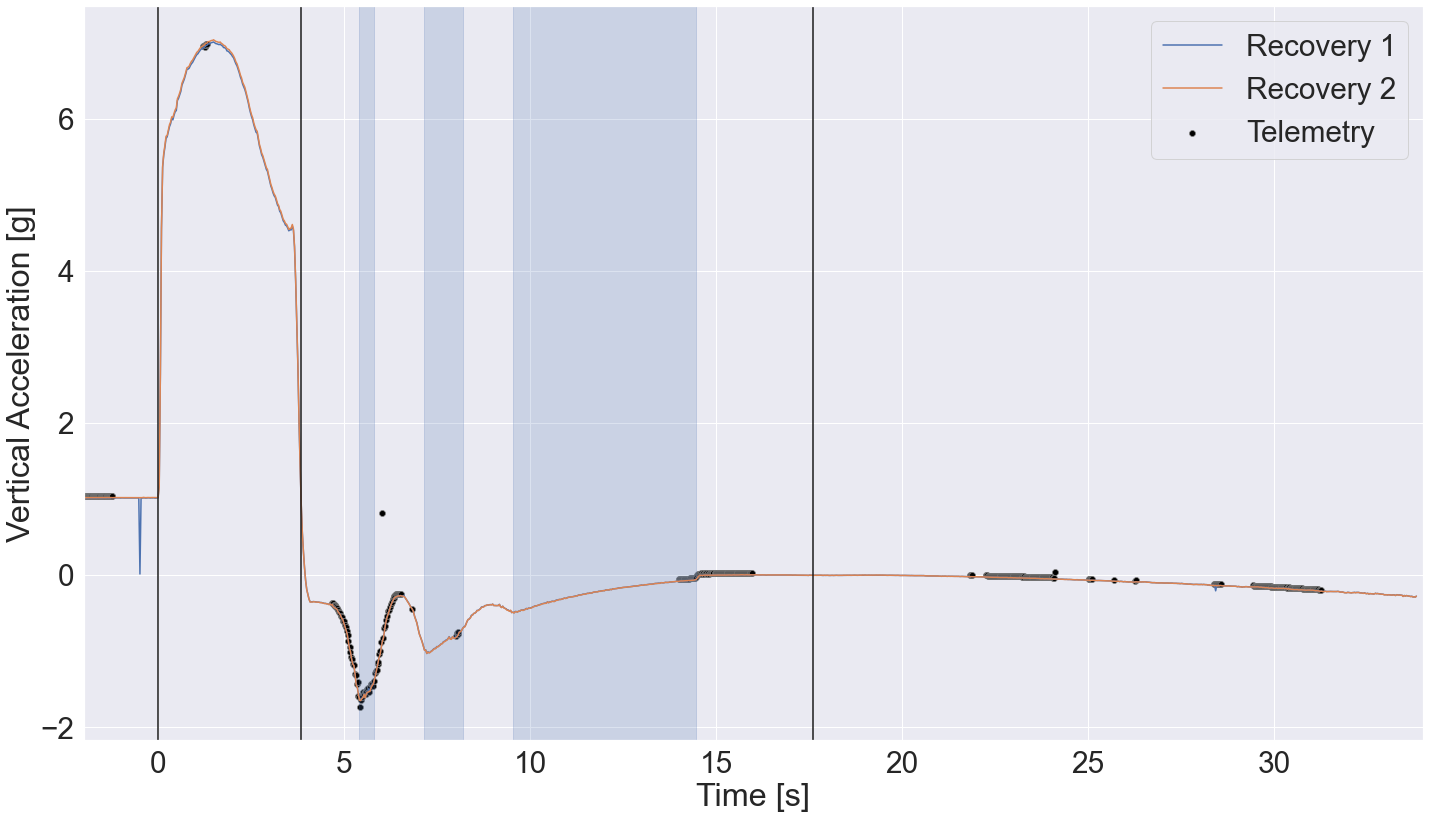 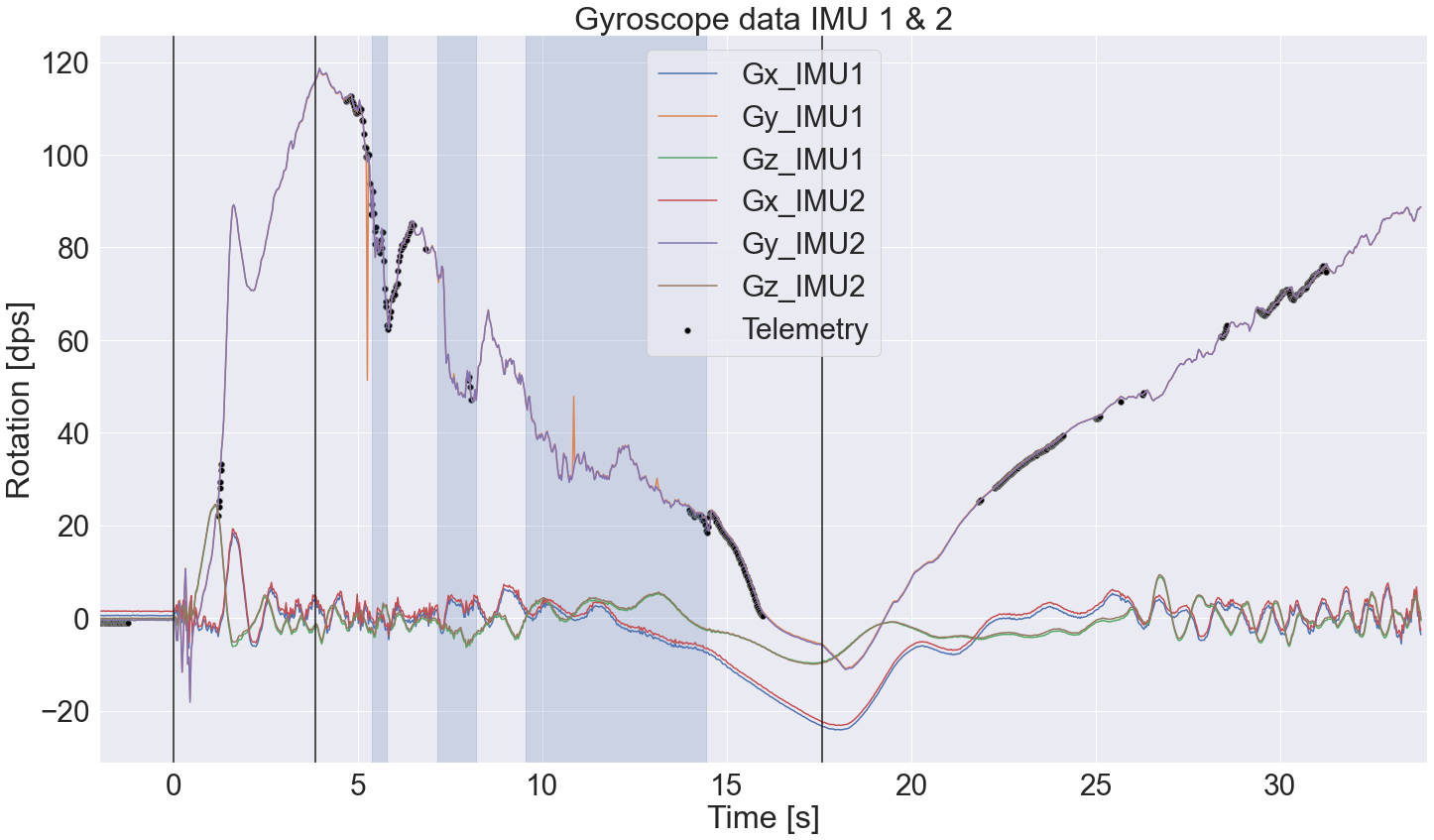 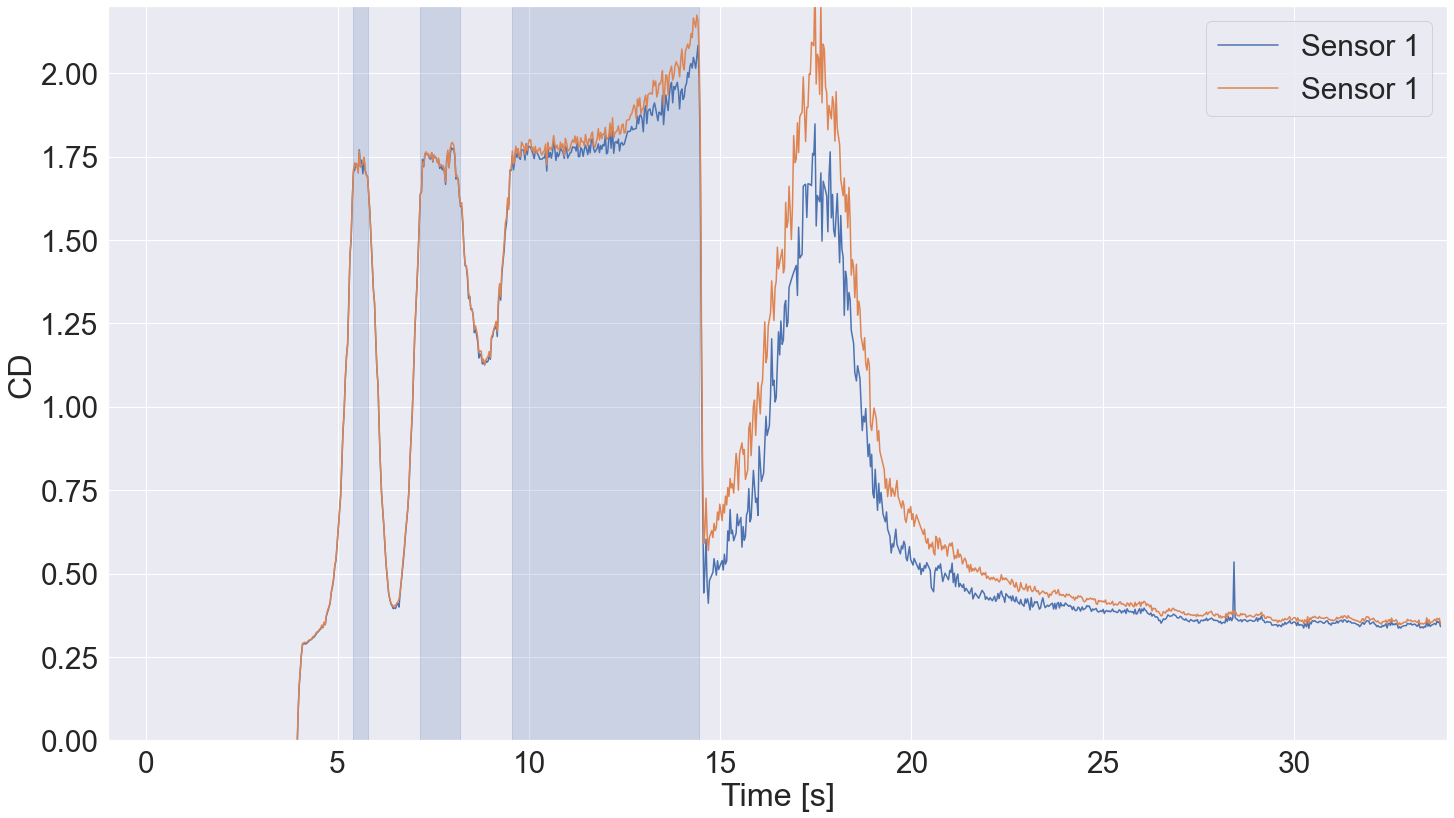 In the above plots, the areas shaded darker indicate the intervals where the airbrakes were fully extended, based on our reconstruction of the events. You can clearly see how airbrake extension directly affects the vertical acceleration – as one would expect. Another interesting finding is that the rate of rotation about the roll rate (which can bee seen in the gyroscope data plot) is also affected by the airbrake extension. Of course: extending the airbrakes pushes mass radially out of the rocket, thus increasing the rocket’s overall moment of inertia – just like the classic ice skater example.

There is one cause for concern however. First off, it appears that the airbrakes are switching from 100% extension to 0%, with no real in-between values. This “bang-bang” behaviour is not really what we would like from our controller, as it can cause bad performance, and one concern was that this was a software issue. Upon closer inspection of the barometer data, however, we noticed that the pressure appeared to increase significantly when the airbrakes extended. This coupling would cause the state estimation to overestimate the effectiveness of the airbrakes, which would then retract – but then as soon as the pressure readings dropped again, they’d extend again. After some consideration, the cause for this unwanted coupling became apparent: extending the airbrakes produces a high-pressure area above the scoops – right where our barometers were reading the pressure. We decided to address this issue in future versions of EULER.

Unfortunately, due to the Coronavirus pandemic, SPAC 2020 was cancelled. However, rumors were circulating that there might be an alternative launch opportunity in Europe, so we set out to manufacture the missing parts for a second EULER rocket. In order to avoid the pressure coupling issues we experienced with EULER’s airbrakes at the maiden launch, I ran another batch of CFD simulations to have a closer look at the behaviour of the pressure above the airbrakes. 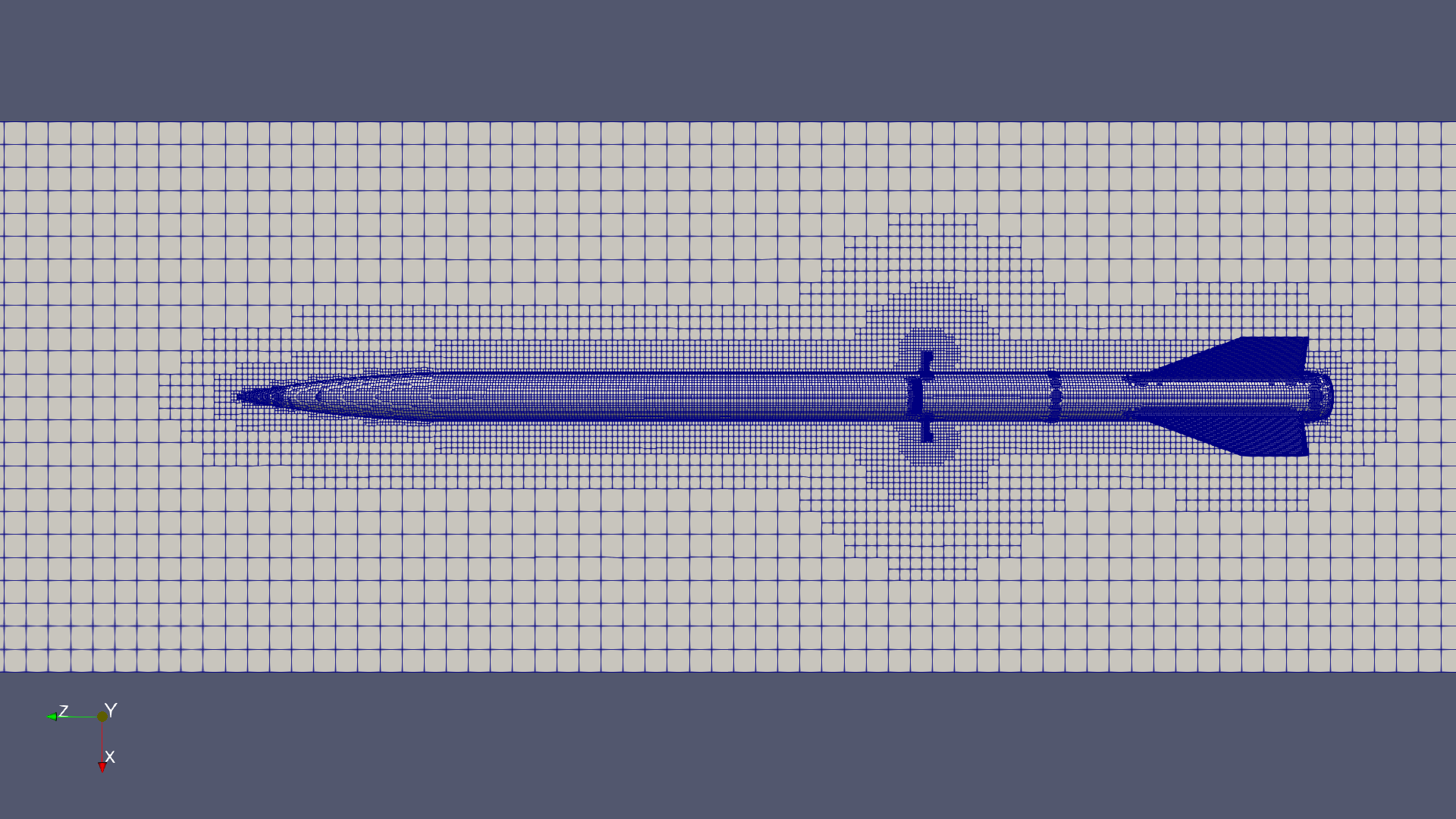 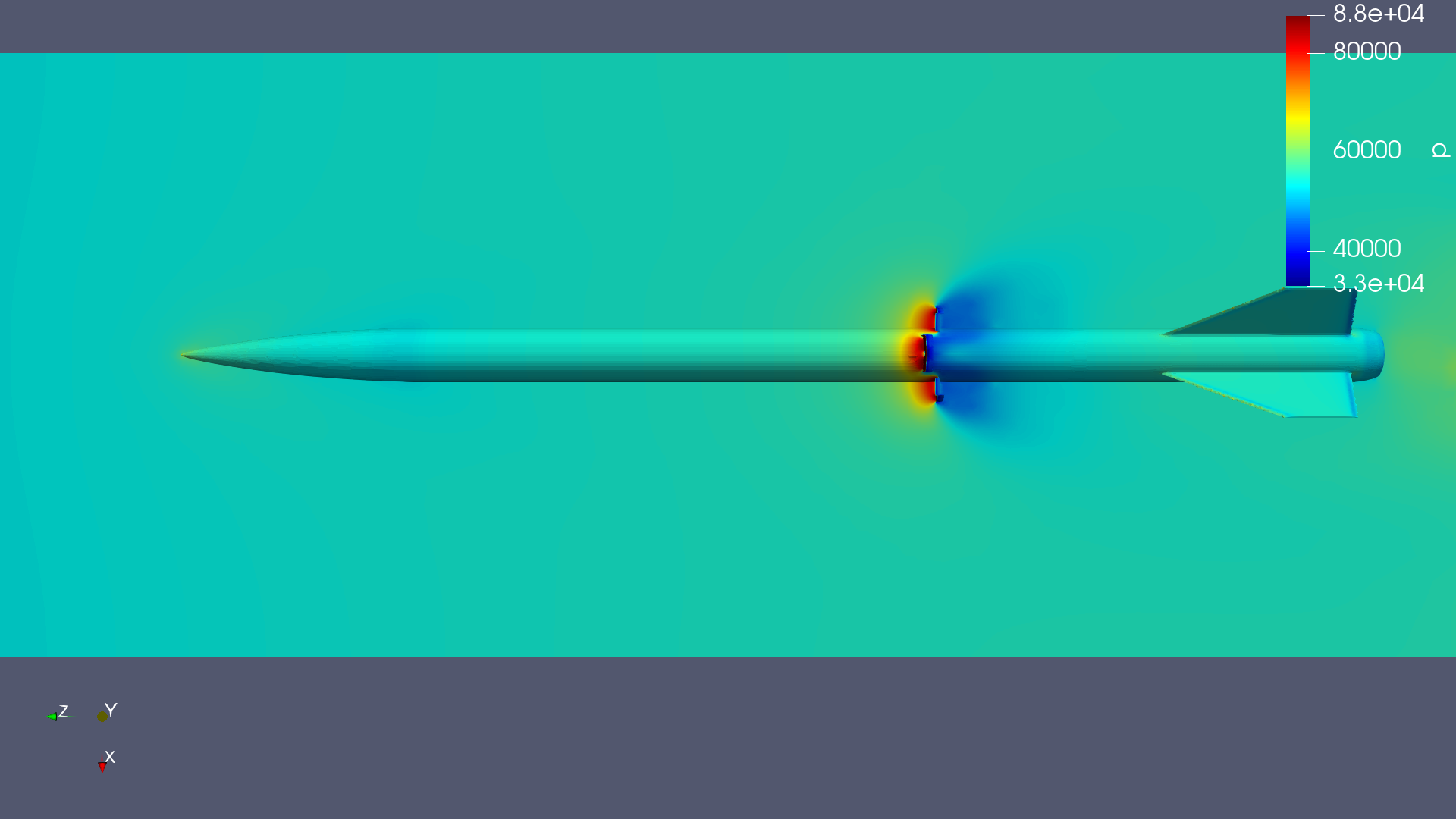 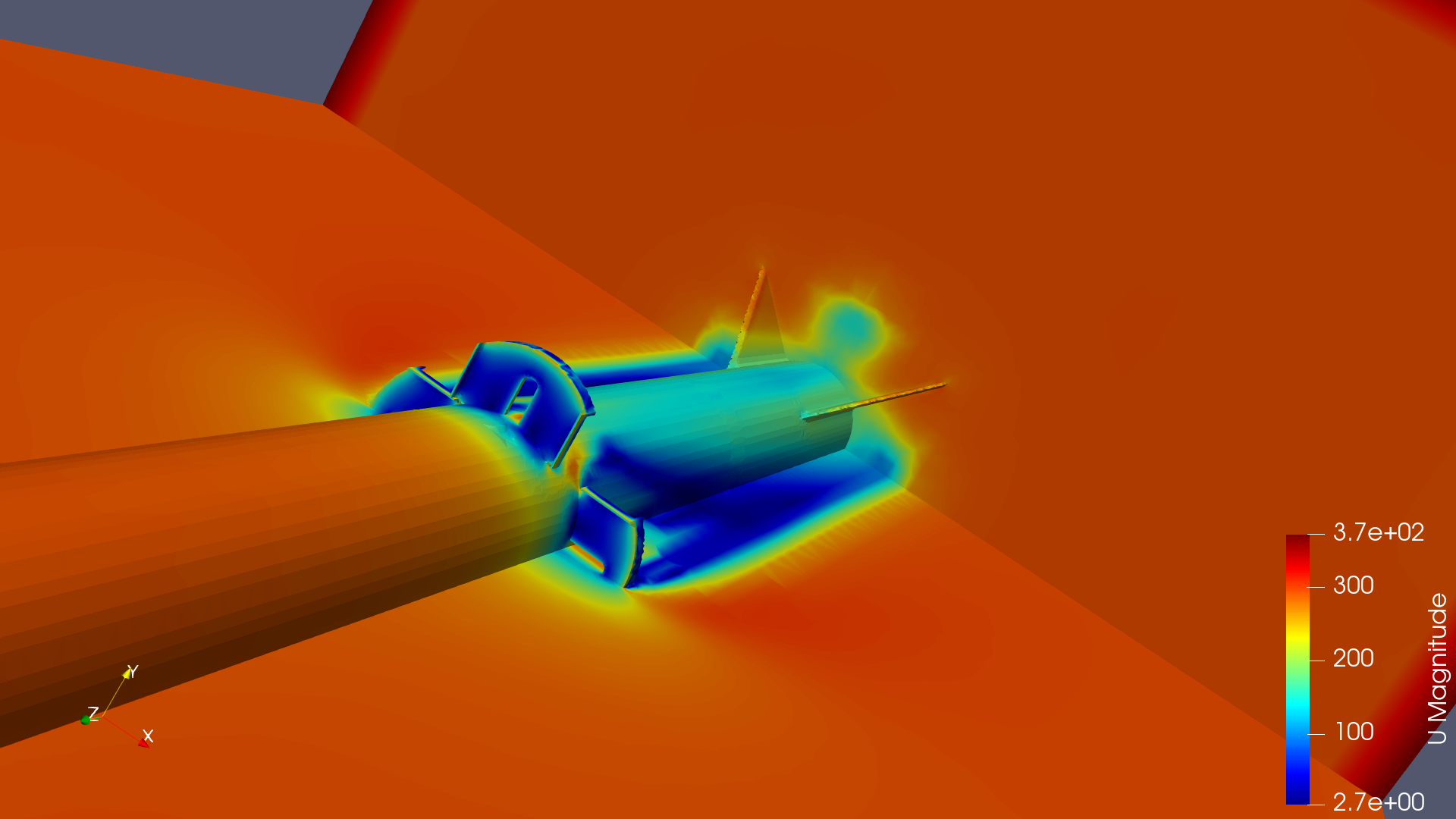 With these results we were able to determine that a distance of about 50cm above the airbrakes would be necessary to prevent them from significantly affecting the barometers.

By September 2020, it was confirmed that the first installment of the European Rocketry Challenge would take place. Our team took part in the competition, excited to be able to launch EULER in a supersonic configuration for the first time! 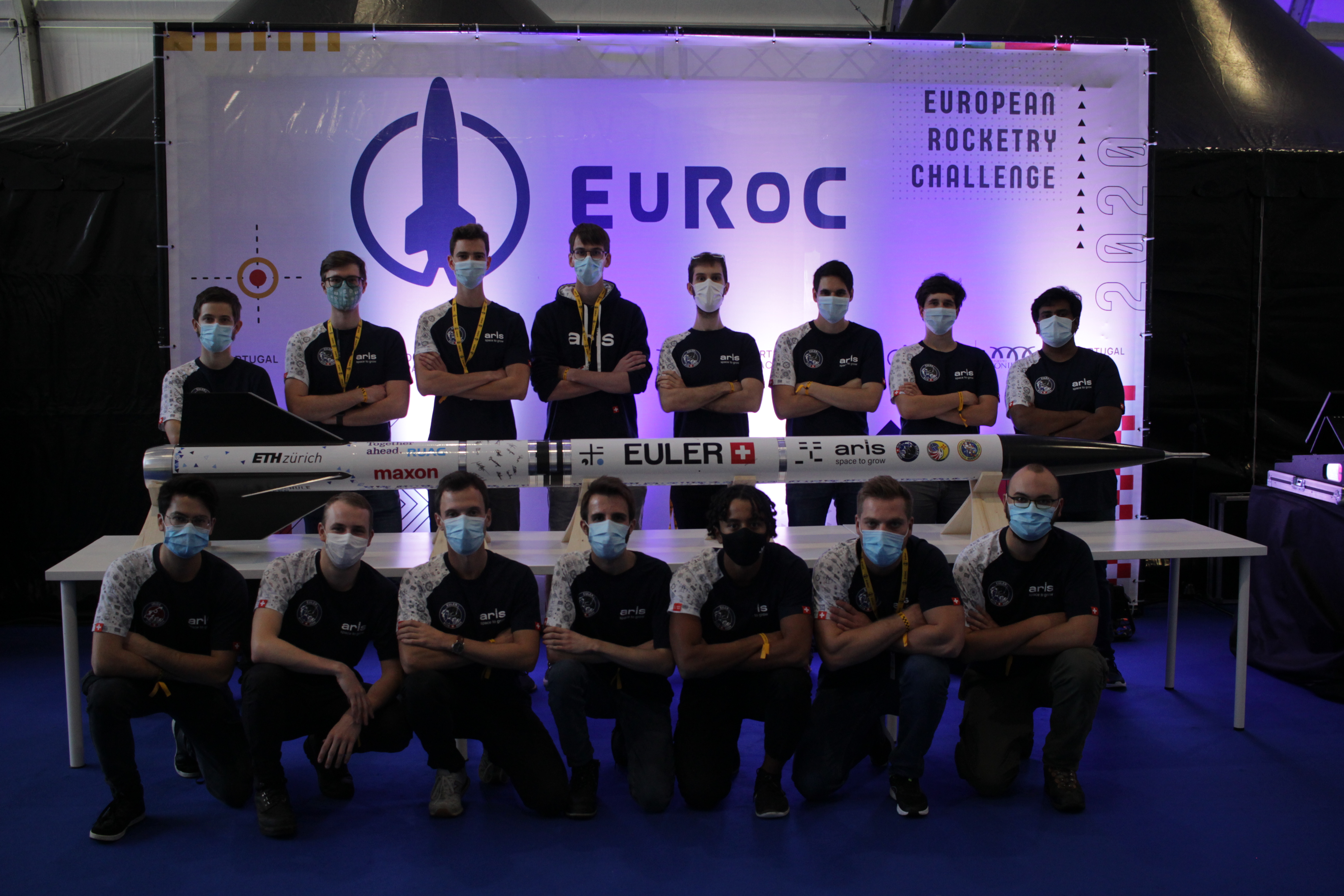 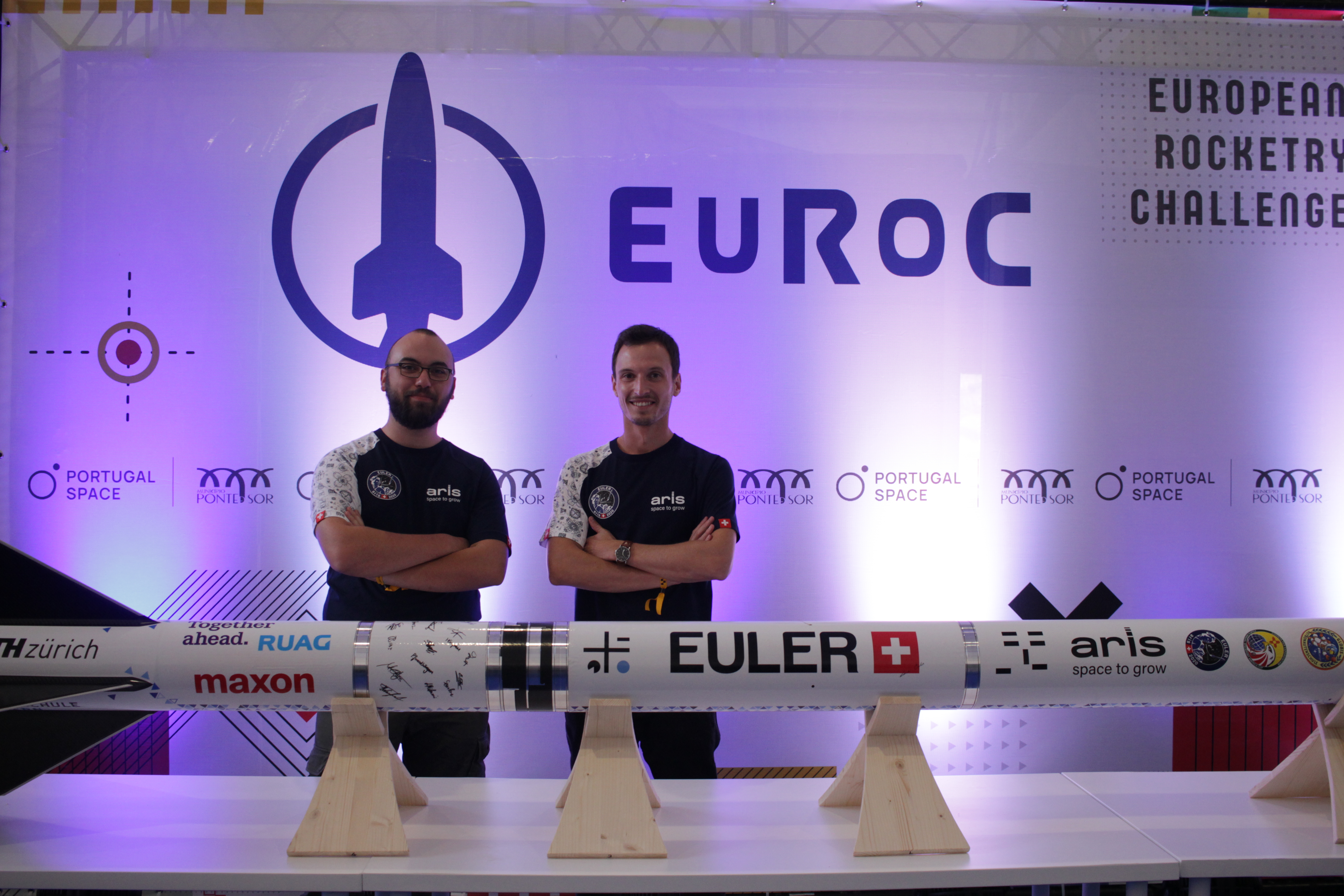 Unfortunately EUER II’s launch had to be aborted due to some unexpected electronics failures, but it was still a thrilling week – we got to meet many teams from across Europe (DANSTAR were an awesome bunch with an awesomer rocket!) and saw many launches. And who knows… maybe EULER II will still manage to fly supersonic some day!